BNP Paribas - It is in Europe that central banks will open the autumn monetary festivities next Thursday.

1- The Bank of England is likely to sit tight, while it waits to quantify the effect of the last two measures implemented this summer on the economy (launch of a new scheme, Funding for Lending, aimed at reducing banks’ funding costs, in collaboration with the British Treasury in June, and raising of the ceiling on asset purchases by GBP 75bn to GBP 375bn in July).

Experts Forecast Currencies Poll... Your Not to Miss Read for the Weekend

One of the most popular contents on FXstreet.com - for not saying the best content on the site.

We have experts, brokers and banks participating in this weekly poll updated every Friday in the afternoon.

Change the major of your interest in the drop down menu and enjoy!…

ANZ - We recommend four views into the coming event risk: (1) Short SGD/MYR, (2) Long USD/IDR, (3) Long EUR/AUD, and (4) Short AUD/NZD. The world feels like it is entering a GFZ; a growth free zone. Fortress Asia has found that Europe has stolen its export crutch, and China is adjusting to slower investment growth. The event risk calendar, obviously, is packed. Downgrade for Illinois, The worst credit rating aside from California.

In recent years a wave of new reform… The prices gold and silver declined for the third consecutive day. The Euro and Aussie dollar depreciated yesterday and may have contributed to the decrease of precious metals rates. Other commodities, such as oil, also decreased. The U.S jobless claims remained unchanged at 374k. Today, the symposium at Jackson Hole will conclude with the highlight will be around…

EUR/USD - Bernanke Can Rock the Boat Both Ways

EUR/USD is now trading under resistance, in the levels it fell to after the Slovak PM said there’s a 50/50 chance of a euro breakup. The focus will shift away from Europe now to Jackson Hole, where Bernanke will deliver a highly awaited speech. Expectations for QE3 hints are now lower, so any talk of new easing could hurt the dollar. If Bernanke says nothing, the pair could lose uptrend support. A…

The EURUSD was unable to maintain its bullish move yesterday  capped by short term top at 1.2589 ?!!

Today I assume a bearish move testing the lower line of the bullish channel around 1.2460/40 zones, a clear break below this level would lead for massive bearish move and might end the current bullish correction .

Immediate resistance is seen around  1.2520 where bounce back to downside is expected , stability below the key resistance 1.2589 is indeed to keep the…

AUDUSD: Further bearishness is still envisaged as AUDUSD extended its declines on Thursday. The pair is now seen testing the 1.0289 level, its daily 200 ema where a breach will push it further lower towards its July 25’2012 low at 1.0177 and then the 1.0100 level. Its daily RSI is bearish and pointing lower supporting this view. Conversely, the pair will have to return above the 1.0409 level and the 1.0611 level to annul its present bearishness. This if it occurs could open up further upside…

Thought of the Day...

EUR has moved in a narrow range yesterday the whole day and made a sharp decline during the american session due to partly profit taking as we are in the month end. For today we shall have more of the same until mr.Bernake's speech. It is not expected QE3 to be announced here today, so probably some analysis of the economic data will be released today by mr.Bernarke. Again the pair will be moved on hopes for QE3, not the real facts. EUR moves in a small triangle formation which started on…

Hi all. Here’s also my 5 cent tech view .. I will break it from the daily chart: 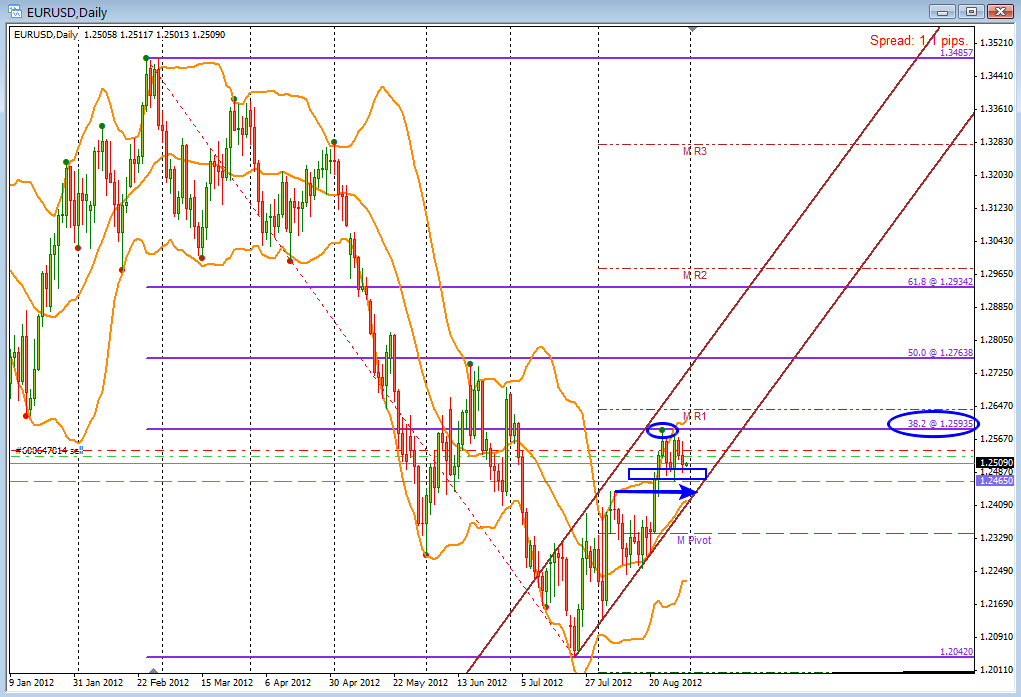 On the 4h chart I usually mark the SR zones .. as there is impossible to say this horizontal line is the key ..
As you can see there is another rising trend line crossing the minor 4h SR zone and there the price stopped for today. I still see a good chance to hit the next bigger SR zone between 2415…

With all eyes on Bernanke and the Jackson Hole speech tomorrow, I do not think its prudent to be giving any trade recommendations (or taking any new positions) till after the announcement with most traders/investors on the sidelines.

Thus, I wanted to do was share an email exchange I had with one of my students which I thought would be really helpful for those struggling with the learning/trading process.  Many traders either now or in the past, have gone through a similar…

Aug 30: TFL-TV In The Afternoon

USDJPY: The risk continues to point to the downside as USDJPY holds on its medium term downside bias. This leaves USDJPY targeting the 77.88/66 levels. A violation of here will aim at the 77.00 level, its psycho level. Below here will call for more declines towards the 77.35 level and then the 76.49 level. Its daily RSI is bearish and pointing lower suggesting further declines. On the upside, the pair must break and hold above the 79.64 level to…