The EurUsd Currency Pair : Why trade anything else?

After hitting 1.2452 last night eurusd is simply attempting to show some strength, but it is real? The momentum is very much real but is it possible to have momentum moving in one direction while the actual trend is another..? Some might say, small trends within larger trends of which can be different from one another.

In my opinion the larger…

Most of you probably already know the software Forex Tester. For those who don’t, this is a computer simulator of the FOREX market.
It allows the user to practice trading and test out different trading
strategies against the historical market data, rather than risk real
money. It’s probably the most known and better rated software for…

The Contest So Far!

Firstly I am awfully sorry that I posted just one or two blogs in the start of the context and then I was out of the screen. I should have continued what I had started, however I do believe that it is always better late than never. So now I am back again...

In so far as my experience about the contest is concerned I have really enjoyed it. There are some outstanding performances by various participants and I do really wish them a very happy ending…

The EurUsd Currency Pair : Why trade anything else?

My blog posts and comments in the FXAnalytics Group could be a little sparse for the next few weeks. In kind of a freak accident I broke my right had and two of my knuckles. Typing is kind of an interesting process that looks more like a chicken pecking around than anything else. Hope to be back to full swing soon.
Jihn

Plan don’t Forecast.
John E. Putman II, CTA
May 18, 2010
There are a lot of predictions floating around in the marketplace. Everyone has opinions, beliefs and a confidence level to back it up. The question is, how useful are the predictions of an Analyst or an individual investor? The short answer is, “not very” (Tyska/Zielonka 2002 and Tongren/Montgomery 2004).
To engage in a solid study of Indicator…
Continue

Check, re-check, and then check it again.

Over the years I've added a lot of different data to my collection, multiple pairs with varying time-frames from different vendors and sources. Last year I began the process of cleaning it up, organizing and streamlining it, all the while being very careful and deliberate not to create duplicate records during the process. Within the last couple of weeks I've begun to migrate all these different chunks of data into a data-base. Today I discovered large overlaps in the data using a…
Continue

Defining Success
An important issue to consider before drilling too deep into what does and doesn't work in Technical Analysis is what does it means to be successful as a trader. Opinions and definitions differ. An important step is not to confuse success with the accomplishment of specific financial goals such as wanting to make ten percent a month. That's a goal that may or may not be realistic, but not achieving it doesn't mean a trade model is not…
Continue

Join us on Thursday, May 13th at FXstreet.com LIVE and enjoy our guest experts' webinars FOR FREE!

Euro and GBP lost all the gains made yesterday now and swing near Friday close levels.

They have made the swing and slide moves during Japanese session to show firming up moves Towards close of the session.During European session they are expected to swing rise to gain the lost ground.During US session swing and quick rises are expected.Buy and sell swing trade opportunities prevail in all pairs as the contrarian moves are expected to happen today to handle the crosses… Continue

Looking ahead to testing...

Over the course of the last year I've been doing a lot of testing on indicator optimization. Most of the updates and stricter testing on the trade model has been finished, but there are still a few odds and ends to be finished. A byproduct of the research and testing is the work that will be covered here, primarily Indicator Optimization. The attached PDF give s quick example of how it can be applied in a simple fashion.
Without any return data there's not a lot to take from it…
Continue

MY Predicted data for EUR//USD for 7th May FRIDAY 2010

Belief, Confirmation and Confidence Bias
John E. Putman II, CTA
May 6, 2010
Research requires a certain amount of neutrality if it’s going to be truly effective and not self-serving. The researcher, in this case the trader, has to be willing to look for the truth in the data, regardless of what it means or its impact on their endeavors.
Ask yourself this question right now: Do I believe technical analysis can be…
Continue

Technical Analysis and Indicator Optimization
John E. Putman II, CTA
May, 5th 2010
The merits of technical analysis (TA), or the lack of, have been argued for decades. Most proponents of the Efficient Market theory believe that TA simply can not forecast future prices; that any advantage gained by TA will quickly break-down due to its very use. Unlike most users of TA, their beliefs are actually based on significant…
Continue

Either this is the biggest B wave i've ever seen, or we're going lower.
Here's a count which could eventually take us back to the 1.2300 region. 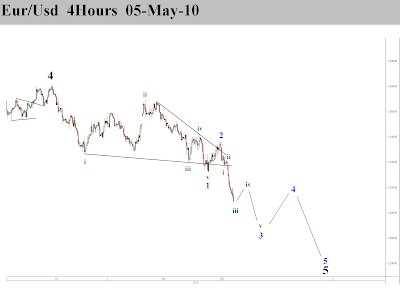 via Gold and Forex EW analysis
by Jeremy… Continue

This is a little guide about the first steps for new users at ForexStreet.net Profile
This should be the first place to check. There you can set your privacy preferences.
We strongly recommend to change your real name by a Nickname, easier to remember and first protection to your privacy. It can be changed in the "full…

Yesterday May 4, EURUSD kept sliding, breaking through the psychological level at 1.3000. The unit found support at 1.2931 today May 5 in the early European session. Investors would focus on Portugal and Spain even if Greece is bailed out. So, EURUSD bearishness might remain,

I keep adding long USD/JPY positons when i see… Continue